148. The Secret of the »Marco Polo Variation«

And both saw now during this little Mandolin solo a common Peony-Vision:

They saw Marco Polo sitting in a Chinese Chunk at the West-Lake together with his Chinese Princess.

Marco Polo is playing this »Spring Melody Hymn« and Palmina is sitting with him in the Chinese Chunk.
It is a very romantic atmosphere, here on the West-Lake.
She is looking very beautifully like an innocent Princess, smiling and listening to this Melody of the 8-Images *) Melody Marco Polo played on his Mandolin.

Palma, as Marco Polo, expressed his deep love to her with this Melody and was lucky to have her back in his life. She came through a Peony-Miracle***) suddenly back in his live. (see also the Miracle in the Chinese Opera »The Peony Pavilion« (Mǔdān tíng / 牡丹亭) **)

»[…] also named The Return of Soul at the Peony Pavilion, is a romantic tragicomedy play written by dramatist Tang Xianzu in 1598, and the plot was drawn from the short story Du Liniang Revives For Love. It depictes a love story between Du Liniang and Liu Mengmei, overcomes all difficulties, transcending time and space, life and death, and finally get together.«

***) A legend, told in Venice, says that Marco Polo’s Chinese princess came through a miracle back into his live as he took the Chunk over the West-Lake in China. A similar miracle like this is depicted in the Chinese Opera »The Peony Pavillion« / Mǔdān tíng 牡丹亭 – Wikipedia: https://en.wikipedia.org/wiki/The_Peony_Pavilion

And also during this Melody they saw as Vision Palma il Giovane composing a »Marco Polo Variation« about this »Spring-Melody-Hymn«.
A Variation for Pipa solo, Viola solo and Harpsichord (or Organ, or 4 Flutes (S,A,T,B).

Palma felt so inspired from that moment as he saw Palmina the first time playing her Lute for his presentation at the Chiesa San Zulian.
Palma felt inspired as he spoke with her for 8 minutes after the concert on the 4th September in the year 1580.
She played so beautifully 40 minutes of his composition »8 Soli for Pipa« for his Speech in Venice with international guests of the Republic, that he felt thankful and composed this little »Marco Polo Variation«
as love-dedication for her.

After this beautiful Vision they looked long from their little island in the direction of Venice. They looked to the evening stars.
They hugged and spoke about their future music projects and Palmina started silently to sing the »Spring Melody Hymn«

Palma leaned his head on her, being a little bit tired.
Palmina felt that he worked hard, with painting, but what did him make so tired.»…did he compose something bigger for me?« Later he laid down and Palma felt asleep while Palmina caress his head tender, soft and slow.

Palmina observed him sleeping and smiled. »…like a little boy…«, she whispered

The little fire under the stars of Venice shined soft and made a warm light all over the little place in the nature. This golden light made Palmina’s smile very harmonic and beautiful. If Palma could see her he would paint her, but now he is sleeping.
A soft Wind breeze moved her beautiful hairs and moved Palma’s drawing-folder, beside her.
A second Wind breeze opened the folder and Palmina turned interested her head to the open folder.

Palmina wanted to close the drawing folder but she saw all the beautiful drawings Palma made of her in the last time.
She smiled. She looked on all his drawings. A lot of her are with lute – Venetian Lute and Chinese Pipa Lute. He painted her also in Asian traditional cloths, which he saw from the Chinese friends living now in Venice.
Then she saw some papers looking like a music score. She discovered 21 sheet of music score.

»Hm, what did Palma compose for me…? Oh a Marco Polo Variation…Like we dreamed in our Peony-Vision«

She looked at the music scores and tried to find out what these compositions are about.

The first four pages are the »Marco Polo Variations« as Pipa score and the next 17 pages are the same music as an Orchestral-Version for a lot of music instruments, but a little bit longer…

»…Oh, my Palma, my secret composer, it is an orchestral Version for a longer Music Piece… Ah, he puts the Marco Polo Variation into a bigger Composition so it is now for Pipa and orchestra. …Hm, hm…and this is a smaller music score, a so called »particell« – a part of a bigger orchestral music score hm…..Wow, how big is then the whole music score? I will ask him tomorrow….He needs his sleep now, my Palma…He wrote this »particell« for me, so that I can orientate and so I can rehearsal my Pipa Part in the whole music piece…ah, here are some Vocalists, he wrote for me the vocal parts, so I follow the score…«, Palmina thought.

Palmina was lucky about his creativity and she feels that she is the reason for that music, she inspired him and he composed secretly as surprise for this music.

Soft she kissed Palma several times tender, during he slept and Palma smiled and had a beautiful dream of an Angel bringing him spiritual food during he is painting and he saw the painting »Elia nutrito dall’angelo« he will paint once during his dream.

And the music scores she found were like that: 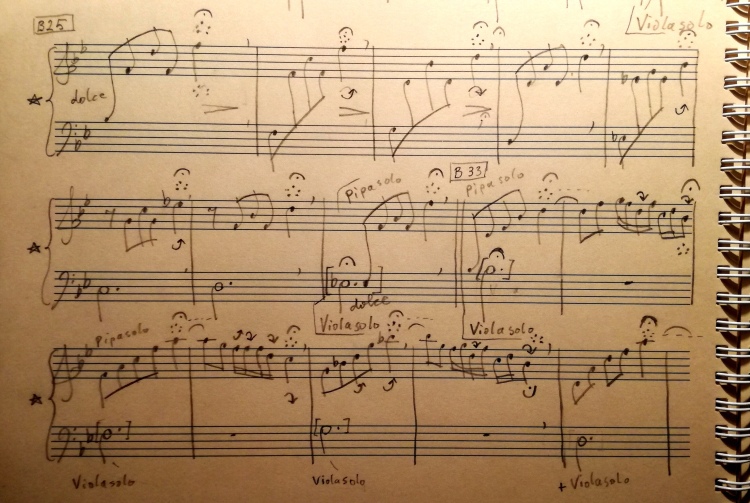 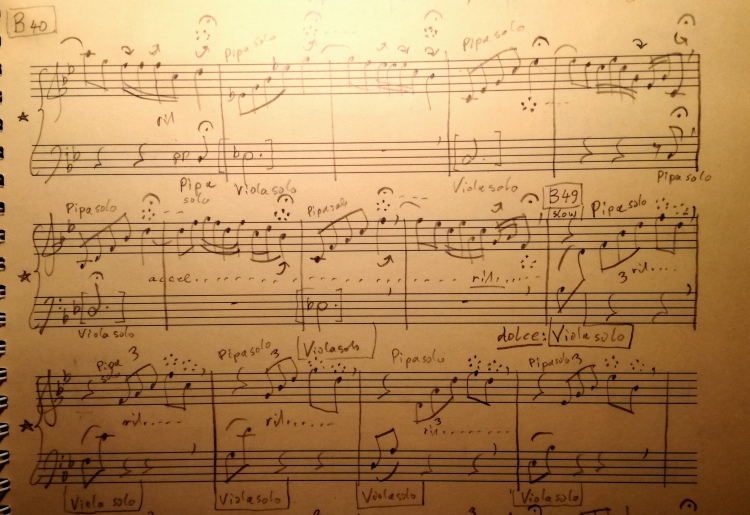 of the Orchestral Version of the 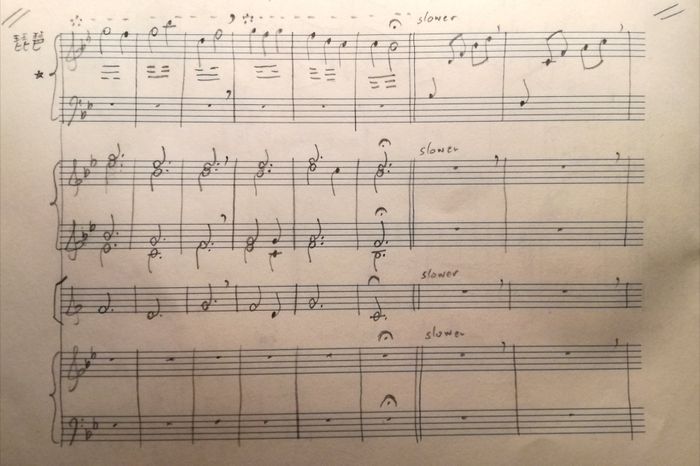 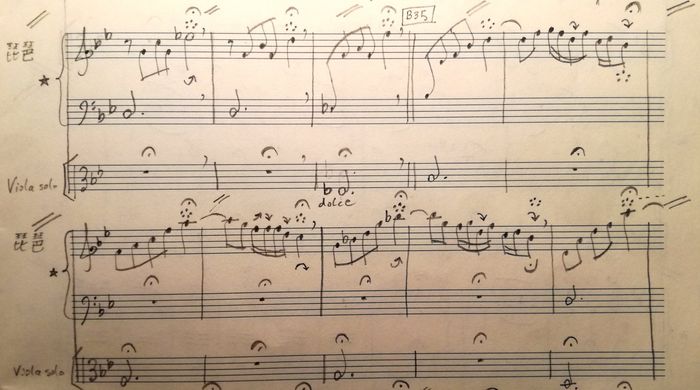 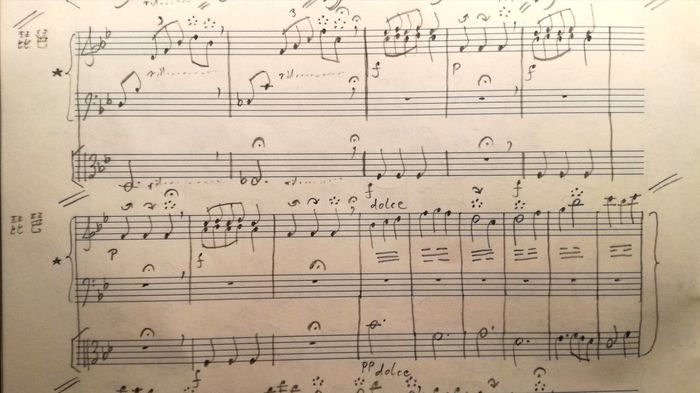 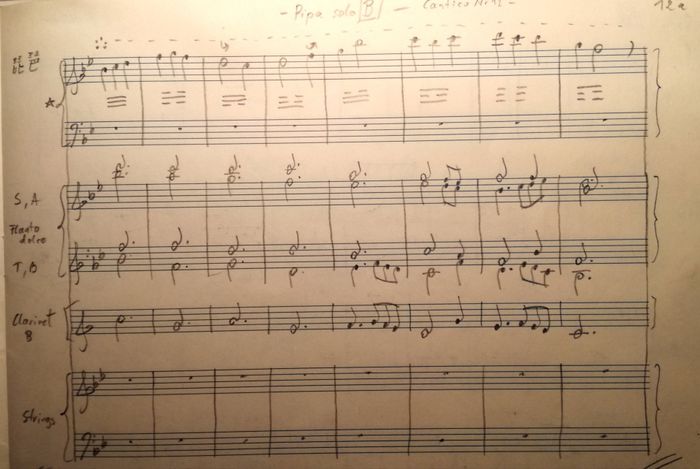 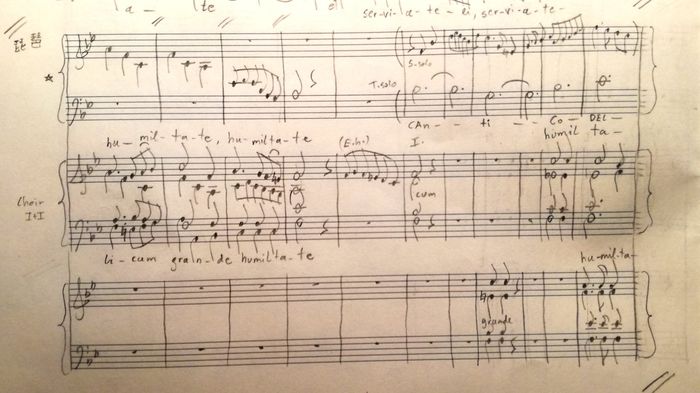 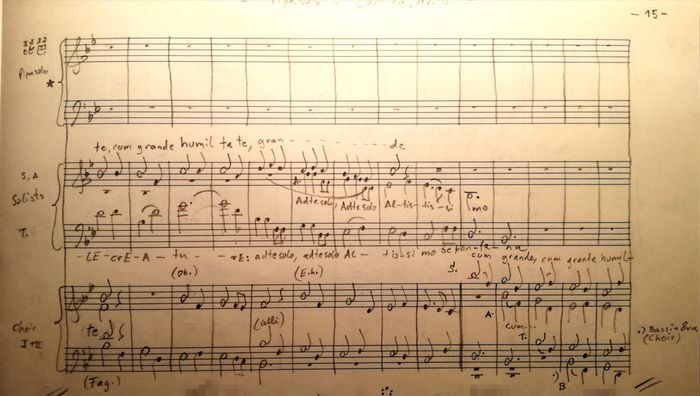 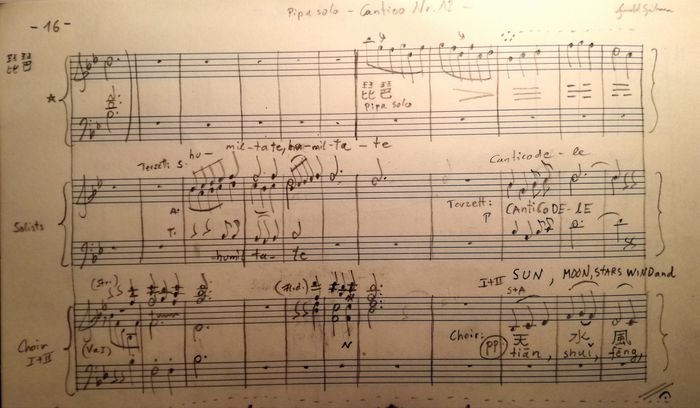 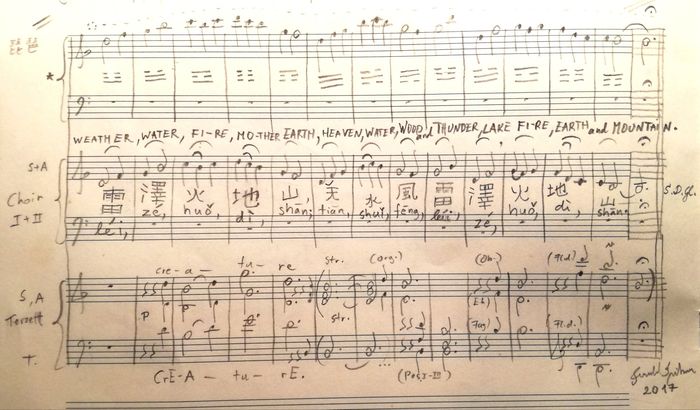 8 Images of Book of Changes I-GING,